Ciccina asks a question over at Pollster.com:
"[quoting Bill Schneider of CNN]"...it looks like the gender gap, long a feature of politics between Democrats and Republicans, has established itself in the Democratic primaries."
....So what is Bill on about? Did something different actually happen, or is he just resorting to the "b-list" material since there isn't much data by race to talk about?"

That got me thinking, and so I spent some time looking up the exit poll data provided by MSNBC (CNN for Wisconsin - for some weird reason MSNBC does not report WI data!)

First, here's the difference between the fraction of women and fraction of men for Senators Clinton and Obama (note: this is not the gender gap referenced by Ciccina/Bill Schneider!): 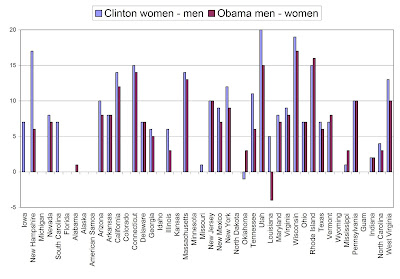 It looks like Senator Clinton wins as much more women than men, as Senator Obama does more men than women. Since women outnumber men among Democratic voters (the average male/female split in these Democratic primaries/some caucuses is 42.5/57.5), this could give Senator Clinton an advantage... Except that it looks like the "popular vote" is a wash (Senator Obama leads by a few hundred thousand out of ~30 million cast in primaries.)
[Of course, the "popular vote" race is fatally flawed: see this dkos post.]

So let's examine the data more carefully. I consider only primaries - no caucus estimates. I also do not count Florida and Michigan.
My popular-vote data haven't been updated particularly for earlier contests after provisional ballots have been counted. But it appears that - out of 30.4 million voters that I account for - Senator Clinton has won women 51.8-45.5 (+6.3%), while Senator Obama wins men 52.7-43.1 (+9.6%). That larger gap among men makes the "popular vote" race effectively a wash.


[As my popular vote data are just two-candidate totals - excluding most prominently John Edwards' votes - there are some errors particularly early on. But overall, this should be a minor error.] 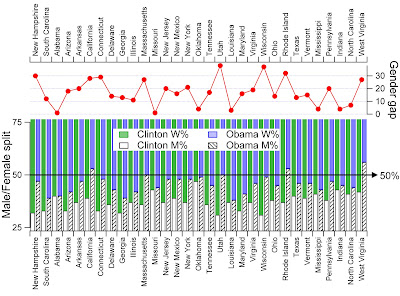 First, women usually make more than half of either candidate's votes - this is to be expected in a Democratic race, as women make up 58% of the electorate. The exceptions are Senator Obama's voters in CA, RI and WV.
Second, the gender gap (as I define it) is almost 30% in WV - after being less than 10% in IN and NC, and 20% in PA. I suppose that's what Bill Schneider meant - the gender gap had almost disappeared in the past few weeks, post-PA and pre-WV.

Spin: Men vote for the man in the race, so they are sexist. Or - women are preferentially voting for the weaker candidate, so they are standing by a sister!
Posted by RS at 10:28 PM

Do I understand correctly that you included some or all of the caucus tallies in your calculations? I was looking at primaries only, and excluding IN and NC because I hadn't gotten around to recording those numbers yet....

I don't think Bill Schneider's reasoning could possibly have been as nuanced as yours - that man is a dope. The way you've integrated the turnout figures is very interesting. But are we perhaps talking about two (slightly) different questions?

One question would be - is there a difference in the rate at which women vs. men support Hillary Clinton?

The other questions would be - to what degree has the support specifically from women voters provided an advantage to HRC?

Ciccina:
I have not included any caucus estimates. Just primaries.
Here's what I did:
Take the two-candidate total votes, divide that into male/female based on the exits.
Then use the exits' gender splits to figure out how many women/men each candidate got.
[Makes a difference for contests where Edwards was a major factor. I haven't recorded Edwards votes. Still, this should be a minor error overall.]

Say women voted in the same proportion as men (Obama 53-43). Then, Senator Clinton has about 2.5 million additional women votes, or about 17% of her base.

This point - it looks like Senator Clinton wins as much more women than men, as Senator Obama does more men than women. Since women outnumber men among Democratic voters (the average male/female split in these Democratic primaries/some caucuses is 42.5/57.5), this could give Senator Clinton an advantage..."

This is exactly the point I have tried to make umpteen times over at pollster.com, and I am ignored each time. But this was the breakdown in 2000 - Gore won female independents by 10, Bush the reverse, so it became a quantity issue.

This is why I cannot figure out why no one is writing about gender. Not only is there a very simple hook (the "men are sexist" thing should get as much play as the "whites are racist" theme - they have the same level of "evidence") but its a critical strategic point for the general.

Ny guess is that if you removed AA's from your calculations the gender gap would be much greater. They seem to be the only voting bloc where gender, class and geography do not matter. It would be interesting to see the numbers if you could pull AA's out of the mix.

Ciccina:
As I said in my post, there are two ways to look at it. Male sexism, or female pride. Probably a mix of both. But you are right - the Male Sexism angle doesn't get as much play as White Racism.

Richard Pollara:
For the last ten primaries - Wisconsin to West Virginia - the gender gap is 15% for all voters, and 20% for whites-only.
Senator Clinton's voters remain the same at 61% female in either case. Senator Obama's female voter fraction drops from 54% to 51% by excluding non-whites.