Though I said I wouldn't post my delegate score-card, I saw a district-level Potomac primary poll and a district-level delegate estimation for Texas today. So here's my score-card for Super Tuesday, comparing my simplistic delegate counts with CNN projections. 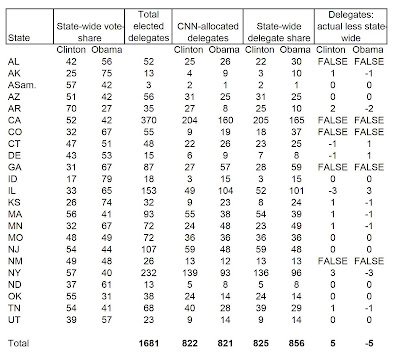 Note that I am counting differences only when CNN allocates all pledged delegates for a state. In the five states where this is not the case, Colorado and Georgia have delegate distributions proportional to the state-wide vote shares. California and possibly New Mexico could give Senator Clinton more delegates than would be proportional to her vote-share. Senator Obama already has less delegates in Alabama than his victory margin there would suggest.

As of now, Senator Clinton has 5 more delegates than the state-wide vote-shares would suggest. When the delegates are completely allocated, she is likely to be ahead even more, probably +9.
Posted by RS at 12:57 AM